One of the most marvelous writers and illustrators of children's literature today, Yuyi Morales mines her Mexican childhood for the magical words and riotous colors that inform her beautiful books. She has won numerous awards for her work, including the prestigious Pura Belpré Medal.

One of my absolute favorite children's book authors, and in my opinion, among the very best publishing picture books today, is the marvelous Yuyi Morales. Born in Xalapa, Mexico Morales mines her Mexican childhood, and her own story of migration, for the magical words and riotous colors that inform her beautiful books. She has won numerous awards for her work, including the prestigious Pura Belpré Medal, and has been named as a Caldecott Honor. Morales currently lives in Mexico with her family, which includes several rescue dogs. She also maintains a robust presence on social media, including Twitter and Instagram. 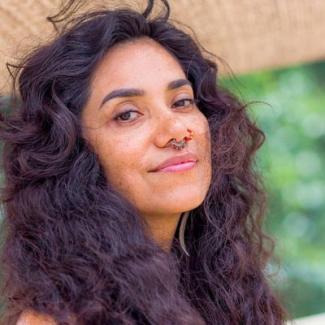 What if your day began when night fell? Little Night is a bedtime story, but with a twist. Mother Sky helps get her daughter, Little Night, ready for night. She fills a tub with falling stars for Little Night’s bath and dresses her in a dress crocheted from clouds. Little Night plays hide and seek throughout her night routine, spurring Mother Sky to find her hiding in the rabbit hole, the bats’ cave, and the blueberry field. This is a perfect read-aloud for bedtime. Morales’ illustrations are big and soft, covering two pages at a time. The muted pastels and deep shades of red, purple, and blue show that the deep dark night, like the color of Little Night’s skin, is beautiful.

By Yuyi Morales
I snatched up eventual 2014 Pura Belpré medal winner Niño Wrestles the World the moment I saw it at the public library. This fun and boisterous book brings the world of lucha libre into story time. A little boy like any other becomes a celebrated wrestler when he dons his lucha libre mask. Niño battles formidable opponents from Mexican history and folklore. Will he emerge victorious against La momia de Guanajuato? Will he be bested by La Cabeza Olmeca? Or will his most dangerous opponents have origins much closer to home? This book was made to read aloud in your best announcer voice. If there was ever a time to ham it up during a read-aloud, this is it. Morales uses comic book flourishes, including fight “sound effects,” to make this book a thrilling read. Be sure to also check out the sequel, Rudas: Niño´s Horrendous Hermanitas, wherein those dangerous opponents closer to home make good on their threats.

Winner of the Pura Belpré medal for Illustration in 2015 (and a Caldecott Honor that same year), Viva Frida is an absolutely stunning, resolutely beautiful book. Morales combines both stop-motion puppets and more traditional illustration to introduce the life and work of Frida Kahlo to the youngest reader. Using sparse, bilingual text, Viva Frida explores Kahlo’s creative process and philosophy: that to create art is to live, and to love.

The details on the stop motion puppets of Frida Kahlo, her husband (the famous muralist Diego Rivera) and various animals deserve to be pored over. Your little ones will love to peek at the fuzzy face of Kahlo’s pet monkey, the embroidery on her voluminous skirts, and yes, her distinctive eyebrows as well. Morales also puts her beautiful painting skills to use in this book, as she portrays in illustrative form the dreams that shape the “real” (that is, the puppet) Kahlo’s art. The contrast between stop-motion puppets and painting together present an entire world in just a few pages.

Dreamers, Morales´ newest book, is the sort of  book many of us have been waiting for, especially for "such a time as this." For this wondrous and lush book, Morales drew upon not only her own immigration story, but the greater need for those of us who have migrated to the United States to tell our own stories, and to have those stories heard. Morales came to the U.S. from Mexico in 1994, with a young son in tow. There were a lot of things that were new-new language, new customs, new people- and she missed home. One day, however, Morales and her son discovered the public library, and everything changed.

It was a magical, wondrous, unimaginable place, where one could not only spend hours reading beautiful picture books, but also take them home! Morales and her son both learned English from the books they read, and those same books eventually inspired her own writing and painting (she includes pictures of some of these books in her illustrations). Published simultaneously in Spanish as Soñadores, Dreamers is a testament to the power of books and libraries, and to the tenacity and creativity of newcomers to the United States. Even in the face of a sometimes hostile climate, we make a way (much like the walking Morales and her son did in their new city of San Francisco) where there often is none. We dream new worlds and new selves into being.

Just In Case: A Trickster Tale and Spanish Alphabet Book

Just A Minute: A Trickster Tale and Counting Book

In a former life, Klem-Marí was a Religious Studies scholar. She much prefers being the Family Literacy Coordinator for Bringing Books to Life! She wants you to read and share books with the children in your life, and for those children to see you to read as well. Originally from Puerto Rico, Klem-Marí also enjoys her cat, baking, yoga, and the works of Octavia Butler.