Nashville is the "Athens of the South"...but why?

Since all of my September blog posts have an education theme, I think it's probably about time I write about the most obvious education-related theme—why Nashville is called the "Athens of the South."

Why is Nashville called the "Athens of the South"? This is a question I'm guessing plenty of people already know the answer to, but nevertheless, here's my take on it.

The short answer—because of its dedication to higher education a.k.a. its colleges and universities. But there's more to it than simply saying it's because of the city's investment in higher education though. So please read on if you're someone that's intrigued by curricula and all things Greek. 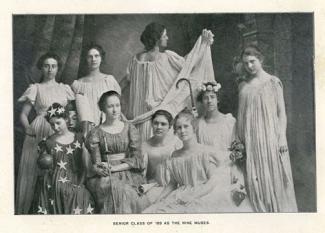 1899 Senior Class as the Nine Muses, at the Nashville College for Young Ladies. 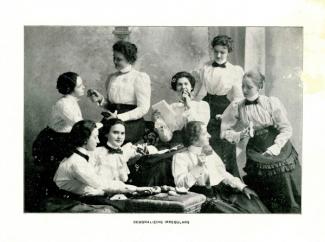 One of my favorite photos from the Nashville College for Young Ladies yearbook: the "Demoralizing Irregulars."

Nashville Gets a Nickname 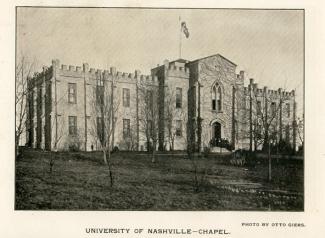 While Nashville acquired its nickname as the "Athens of the South" PRIMARILY because of its dedication to higher education, it was perpetuated in a few other ways—from the building of the Greek-Revival-styled State Capitol to the Tennessee Centennial Exposition, which brought about Nashville's iconic Parthenon building.

A great quote from Henry McRaven's book Nashville, "Athens of the South", and again included in the Athens of the New South book summarizes the solidified name well...

"Just as Athens, Greece was recognized centuries ago as the center of learning, so Nashville was accredited from its very beginning as a community where the attributes of learning and the appreciation of the fine arts were reflected in the leadership of its men and women in all walks of life."

Who was the first individual to propose the nickname? Someone I've written about before in a previous blog post actually—Philip Lindsley. Lindsley came to Nashville from New Jersey, after serving as the president of the College of New Jersey (Princeton University). He was considered to be one of the foremost classical scholars in the U.S. at the time, and came to Nashville in 1824 to lead the struggling Cumberland College. The next year after he came to Nashville, the name of the college changed to the University of Nashville. 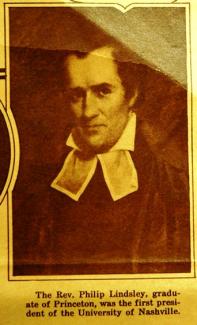 The college's name change and the new nickname for the city was all a part of Lindsley's grand plans for the city's higher education system. With the college he worked for, he wished to create a center of learning and civilization in the midst of the "old southwest".

After establishing these new names (for the city and college), the next part of Lindsley's plans involved bringing some of the most eminent scholars of the day to the school to teach various courses such as the classics, languages, math, etc. Also to top it off, he unveiled his plans to add many more new academic programs to the college in the process.

Quite the grand plans, eh? Well, as the famous Norman Vincent Peale quote goes, "...shoot for the moon. Even if you miss, you'll land among the stars." 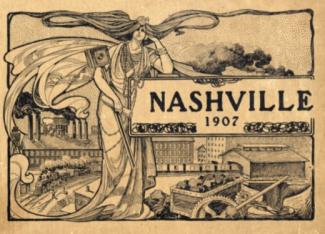 Establishing a powerful nickname is one thing, but adding weight to its value is another, and Nashville did just that throughout the 19th and early 20th century. And arguably is still adding to it today.

In Mary Ellen Pethel's book Athens in the New South, the author discusses how the city never slowed down as a progressive city, even during the Civil War. As opposed to other southern cities that experienced destruction and evacuation during the war, Nashville benefited from being the first Confederate city to be occupied by Union forces. After the war, industrialization was a seed that had been planted and was growing rapidly, all thanks to the city's "...demographic, structural, and cultural composition."

But the city was still a southern city at heart, which meant that it was not without its prejudiced flaws. Pethel points out that...

"Even as leaders in the South selectively followed the models of northern cities such as Boston, Philadelphia, Chicago, and New York, they continued to maintain a distintive sense of 'southern-ness.' These feelings represented the deep loyalty of white Tennesseans, despite having fewer slave plantations before secession and the state's Union occupation during the war."

So essentially, while Nashville embraced progress, they also held tight to their traditions. Pethel notes that "...this tension would bring change and contraditions, good intentions, and varied outcomes to Nashville from 1865 to 1930." Even though, Pethel also points out that the city was "less entrenched in the social hierarchy of race", in part due to the state's high(est) number among secessionist states, of Unionists and individuals that opposed slavery and the war.

All of this pointed out, plus the city's advantageous geographic location for the railroads, to show how the city's rapid growth (guided mostly but not completely by southern traditions and ideals) allowed for the institutions of higher education to prosper as well. Pethel says...

"At the center of this socially constructed enterprise were young men and women, both white and black, who had greater access to higher education through the city's newly established schools, including Vanderbilt University, Fisk University, Ward-Belmont School, David Lipscomb College, Meharry Medical College, Roger Williams University, Peabody College, and Tennessee A&I. With greater numbers of young people attending colleges and universities, these factors combined to influence the trajectory of Nashville's urbanization and distinctiveness as a regional center of learning."

Another book I read and highly recommend if you're someone that loves reading about Nashville's macabre past, like me, is Brian Allison's Murder & Mayhem in Nashville. In one of his chapter's, Allison states that "...reconstruction led to rapid growth and an influx of wealth that transformed the very fabric of the landscape; by 1890, the town of brick had become a town of stone. New schools—ike Vanderbilt and Fisk—were born, and Nashville became known as "the Athens of the South" for its educational opportunities." 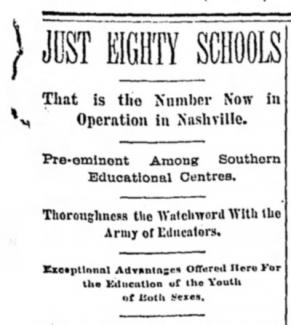 And it wasn't just for the quantity of the schools opening in Nashville (though that was impressive as well), but Pethel's book points out that it was also the quality of these institutions that made them stand out to the rest of the country (see the list of schools below). And coming full circle, as the city influenced the growth of education, the education also helped influence the growth of the city. The locations of some of these schools made a big difference, as they helped pull the city west into the suburbs that were away from the commercial downtown.

A few years later, after the end of the first World War, Nashville again found itself at a time of strong growth even though the industrial boom it had experienced decades before did not fully sustain itself. The population of the city by 1920 (minus the suburbs) was 118,340; with the suburbs, it was closer to 140,000. And instead of production, it was the services that the city provided that helped maintain its role as an important city of the South. And of course, higher education (along with medical care) was one of the services at the top of Nashville's components.

So in the words of the SEC (Southeastern Conference), education in Nashville "just means more." 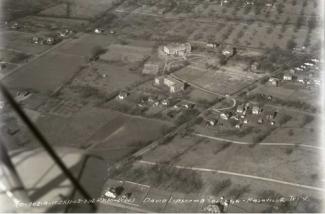 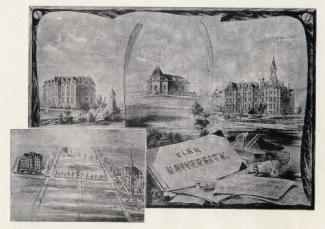 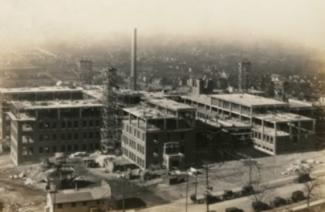 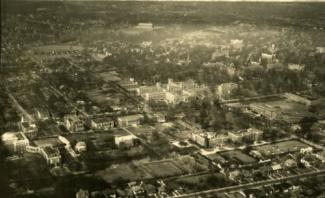 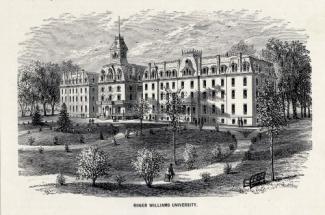 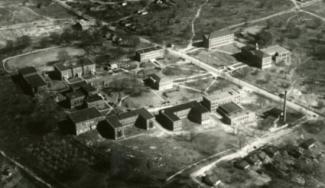 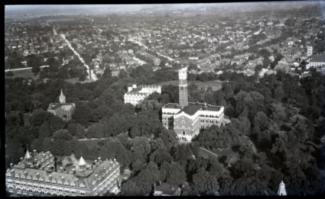 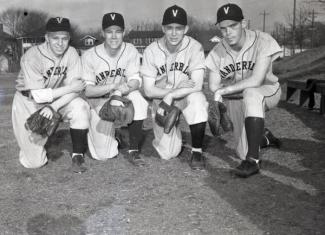 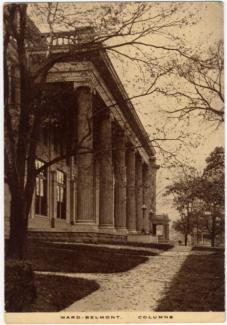 To name a few other notable schools in Nashville that no longer exist...

If I missed any others, I apologize. That's a lot more research than I have time for. Feel free to comment below if you have any other suggestions though. 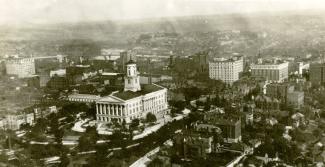 Rewinding time a tad to now address the physical characteristics of the city that helped boast its nickname—exhibit "A" is the beautiful State Capitol building.

Where the Holy Rosary Cathedral once stood on Cedar Knob is where the construction of the building began in July, 1845, and was completed in 1859 (with grounds' work continuing until the Civil War).

The architect of the building, William Strickland, designed the structure in a Greek Revival Style. The book Nashville Architecture: A Guide to the City, describes Strickland's work on the Capitol as such:

"Its commanding hilltop location, its bright masonry of Tennessee limestone, and its temple form met three of the four basic traits of the Greek Revival in America. Strickland's skillful rendering of Greek ornamental design met the fourth trait. He used all three Greek orders: a Doric basement, Ionic porticoes on the four elevations, and a Corinthian cupola, with the Greek details both on the exterior and interior reflecting careful craftsmanship and artistry. His inspiration for the dominant Ionic porticoes came from the Erectheum in Athens while the cupola design was inspired by the Choragic Monument of Lysicrates, another Athens landmark."

Like the city's water works system, the construction was completed by slave and convict labor. It's actually believed to be "the most significant project where the state government rented slave labor." Nashville stonemason A.G. Payne was paid $18/month for their labor.

The architect died before the building was completed, but is now buried in the north facade of the structure. His son, Francis, took over as architect for 3 years after his death. When Francis was dismissed in 1857 by the building commission, architect Harvey M. Akeroyd finished the job.

The Tennessee State Capitol is one of the oldest working capitols in the nation. It was added to the National Register of Historic Places in 1970, and also named a National Historic Landmark in 1971. 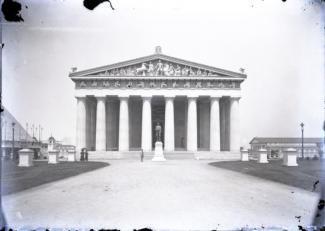 The original Parthenon at the Tennessee Centennial Exposition.

And last but certainly not least, we have Centennial Park's iconic Parthenon replica. But the one we have today is actually not Nashville's first parthenon; the original Nashville Parthenon was built and stood at the center of Tennessee's Centennial Exposition in 1897.

Due to its popularity among fair-goers, organizers decided to actually keep it up after the exposition closed at the end of 1897. But, like most world's fairs and expositions, the buildings' materials are not meant to be long lasting; the first Parthenon was built out of brick, wood, and stucco.

Nashvillians didn't have to wait too long for their permanent, full-size replica of the ancient Greek temple though. In 1920, the city decided to build the permanent addition to Centennial Park.

The architects hired for the job were William B. Dinsmoor of New York and Nashville architect, Russell E. Hart. The general contractors were none other than the Foster and Creighton Company, the same company responsible for building several Nashville buildings throughout the 20th century, such as the Bennie Dillon building (the building that is catty-corner from the Downtown Library), the Union Stockyards, the West End Synagogue and even Memorial Gym on Vandy's campus (plus several hospitals around town as well).

Though the city could not afford to rebuild the structure in the original marble, it's still an impressive achievement since it was reconstructed in its archeaologically correct dimensions. The building materials used to resemble the original marble though were Potomac River gravel, crushed ceramic tile, and quartz.

Further additions and renovations have been added to the Parthenon and the Park over the years, including the 42-foot-high statue of Athena that's inside the Parthenon. It was sculpted by local Nashville artist Alan LeQuire, and unveiled in 1990.

Due to deterioration to the structure over time, Metro Government committed a total of about $12 Million dollars to repair the building in 1994. And of course, it's still standing strong today, surrounded by Lake Watauga, the Centennial Art Center, and several other monuments that have been built over the last century. 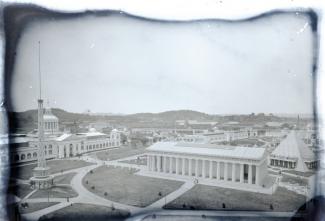 The Tennessee Centennial Exposition in 1897.

Athens of the South: College Life and the Making of Modern Nashville

Nashville architecture: a guide to the city