As Nashville Battles COVID-19, Our Library Lends a Helping Hand 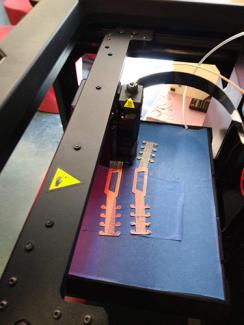 As shortages of personal protective equipment (PPE) for front-line workers mounted across the United States, the Tennessee State Library and Archives sounded the call to libraries across the state.

Their question was a simple one: is there anything you can do to help?

At Nashville Public Library (NPL), the answer was a resounding yes. And the staff of Studio NPL, the library’s makerspace for all things tech-related, knew just the way to do it.

Using the studio’s 3D printing technology, studio lead Niq Tognoni and his team created 900 mask extenders for workers in the medical and public sectors. The extenders allow users to adjust their masks, and keep the retaining bands off of their ears, to create a more comfortable fit. They can be reused after cleaning with soap and water.

“When you’ve got people wearing these masks for eight hours or more a day, they can start to get really uncomfortable,” Tognoni said. “We’ve had some feedback from users saying that they’ve made a real difference in their work.”

The Studio NPL staff donated 200 masks to the Metro Nashville Parks and Recreation Department, and 200 more to Metro Nashville Public Schools. Both organizations are hosting meal drops, where their staff engage directly with the public. Another 500 masks went to support Nashville General Hospital at Meharry.

Determined to make as many extenders as they could, two members of the Studio NPL team took 3D printers and worked out of their homes. Tognoni also took it upon himself to don his own mask and deliver the extenders personally.

The Tennessee State Library and Archives provided the template that Tognoni’s team used to create the extenders. With their current capacity, the team can create three extenders, per 3D printer, every hour, up to 20 at a time. They’re currently making mask extenders for NPL staff as we prepare to reopen our library.

Tognoni also said that, in addition to the official work they’re doing for NPL, several of the Studio NPL team, including mentors Ashley, Will, and Zach, are also creating masks for front-line workers with their own time and money.

If you’re curious to see what else Studio NPL is up to, be sure to check out “The Playlist” on NPL Universe, our library’s collection of streaming events.