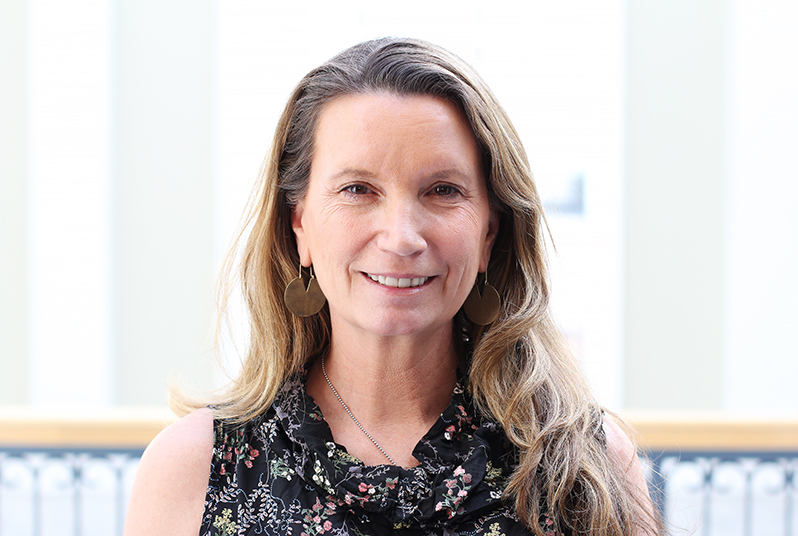 As we count down to the virtual opening on August 18 (save the date!), we're sharing another one of these powerful voices. And we want to share yours, too. Join us for “I Ring the Bell,” a community social media campaign to show your support for women everywhere, and tell the world what matters most to you.

Visit the Votes for Women page to sign up for email updates on the virtual opening and learn how to make your voice heard with “I Ring the Bell.”

A Road Paved with Love

When Becca Stevens was five years old, her father, an Episcopal priest, was killed by a drunk driver. Not long after, the man who filled in at her father’s church while they sought a new minister began to sexually molest her.

And it went on for years.

For many children, sexual abuse starts them down a dark road. As many as 500,000 children are sexually abused each year, according to the Children’s Assessment Center. The trauma they suffer can lead to prolonged mental health issues, increased likelihood of teenage pregnancy, substance abuse, prostitution, and other struggles.

But for Becca, it was the start of a path to something more — a journey charted with one guiding philosophy: love heals.

As the founder and president of Thistle Farms, an organization devoted to helping women survivors of trafficking, prostitution, and addiction to heal, Becca turned her trauma into a beacon of hope, redemption, and love for hundreds of women.

And that was just the beginning.

By 1997, Becca had been serving as an ordained Episcopal priest for several years. Her work brought her into contact with women who had been the victims of childhood abuse, and were leading lives immersed in trafficking and addiction.

Becca’s experiences taught her that women don’t get in this horrific cycle of addiction and abuse by accident. Instead, she saw that unjust systems, and failures in communities, had left women survivors with few options.

So she started a community.

Beginning with five women, the Magdalene program became a home where residents received support, instead of judgement; formed friendships, instead of answering to authority figures; and found love, instead of hopelessness. Through instruction, encouragement, and support over the two-year, free-of-charge program, women learned to forge a new life, one where their past trauma didn’t dictate their futures.

“Women survivors have a beautiful voice with stories worth sharing,” Becca said. “Their stories can tear down old myths and build new hope for communities.”

But while Magdalene proved successful at helping women heal from abuse, it didn’t provide reliable income.

And so, in 2001, Becca and a team of women, many of them Magdalene graduates, opened a bath and body products arm of the organization. In the defiant fashion that defines much of her life, she chose to name it after a plant that many people would call a nuisance.

Through Thistle Farms, now the name of the whole organization, the women coming through the residential program found the stable employment and reliable paycheck they needed. They didn’t just work there — they built the business.

Today, Becca has seen more than 200 women complete the residential program, with hundreds more eager to enroll. Many of them move into full-time positions with Thistle Farms, which is now a multi-million dollar company.

A life-long leader and entrepreneur, Becca has now helped establish eight justice enterprises, raising more than $55 million in private funding over the years. She is an author of more than twelve books and a passionate speaker who explores a wide range of topics and experiences from her life, with the same unifying message: love heals.

The Voices of Women Today

Having spent most of her adult life supporting and championing women, Becca is the perfect person to ask about the issues affecting women and girls today, and how the voice we have with our right to vote can make a difference.

What do you want to be different for the next generation of women?

I want them to strive for strength of heart, mind and body. I don’t want the next generation to be burdened by other attributes often laid upon women to keep them feeling weak or silenced.

What does the right to vote mean to you?

I took the right to vote for granted when I was younger. I do believe it’s important to exercise your voting liberties. It can rally communities and change the course of our future. Sacred resistance is also important. Civil engagement, civil disobedience and protests are important aspects of voting. When I think of voting rights, I imagine a long line of women wearing white, protesting with strength and hope.

What form of power do you not have that you wish you did?

The power of invisibility or, more realistically in this world, the power to reform justice work into a non-competitive sport. I’d love to work alongside many of the heroes doing important justice work, cooperating and coming together to heal whole communities.

Author's Note: NPL presents facts as shared with us by those featured in our stories. While we make every effort to verify any information shared, these posts should be used for entertainment and reference only.